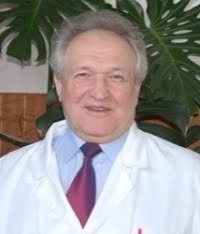 Professor Mislitskiy Valentin Frantsevich is an outstanding scientist, talented lecturer and teacher at the Department of Pathologic Physiology of Bucovinian State Medical University, who contributed greatly to the development of medical science and higher education in Ukraine.
Valentin Frantsevich was born on the 18th of September,1938 in the village of Gumentsi of Khmelnitskiy Region in the family of peasants. His father was mobilized and defended our motherland during severe years of the Great Patriotic war. Thanks to the persistence of his mother and his aunt Valentin, enjoying history and belles letters, entered a medical college in Chernivtsi. In 1952 – 1959 he joined the Soviet Army as a major sanitary instructor and later managed an army drugstore. The Army, where Valentin fulfilled the duties of the Young Communist League organizer’s assistant, blessed his way to Chernivetskiy Medical Institute , where he was the secretary of the Institute Komsomol Organization. Mislitskiy graduated from the Institute with an honours diploma and was proposed to take a post graduate course at the Normal Physiology Department headed by Prof. Kirshenblat J. D. In the prolific atmosphere created by experienced lecturers and scientists Dovgan V. V., Chigrina Z. I., Semen N. P. and other under the leadership of Prof. Kirshenblat Mislitskiy accomplished his candidate dissertation with success in 1969. In 1968 Valentin Frantsevich became an assistant at the Department of Normal Physiology, simultaneously fulfilled the duties of the Young Communist League organizer and took an active part in the Institute’s Song and Dance Ensemble headed by the People’s Artist Pavlo Virskiy  and drama circle headed by P. Petric, an actor from the Olga Kobilyanska Music and Drama Theatre. Being the soul of the students group and enjoying life and nature, Valentin Frantsevich initiated regular hikes into our beautiful magic Capathian mountains.
In 1990 Mislitskiy defended his doctorate dissertation “Sex Differentiation of Some Rats’ Limbic System Structures in the Prenatal Ontogenesis” and was appointed the head of the Pathologic Physiology Department. Prof. Mislitskiy continued the tradition of his brilliant teachers professors Kirshenblat J. D., Mitskevich M. S., Rosen V. B., Naumenko Ye. V., academicians Akmayev I.G. and Reznikov O. G. and made his valuable contribution to further development of medical science. Prof. Mislitskiy headed the Society of Pathophysiologists in Bucovine. In 2004 due to his active work the IVth National Congress of Pathophysiologists of Ukraine took place in Chernivtsi with the participation of 200 delegates from Ukraine, Russia, Moldavia and Poland.
In the Medical Institute of Chernivtsi – now Bucovinian State Medical University – professor’s talents has flourished to the full. Prof. Mislitskiy has written more than 270 scientific works. He was a member of the publishing boards of the journals ”Bucovinian Medical Herald”, “Khist”, “Clinical and Experimental Pathology”. In 2004 he was elected a member-academician of the Ukrainian Academy of Sciences. Valentin Frantsevich is a laureate of Yuriy Fedkovich prize.
Prof. Mislitskiy reared an authoritative school of scientists, among them Gunkov S. V., Vatter N. K., Slonetskiy B. I., Khomko O. Yo., Podolyan S. K., Terletska O. G., Tkachuk O. V.
Prof. Mislitskiy has gained a rich experience and deep knowledge of medical science, which he has been ungrudgingly sharing with his collegues and students.
Valentin Frantsevich, a handsome intelligent many-sided gifted decent generous and friendly man by nature, enjoys deep respect and sincere love ,who is lucky enough to know this beautiful person.
Voloshin Olexander Ivanovich 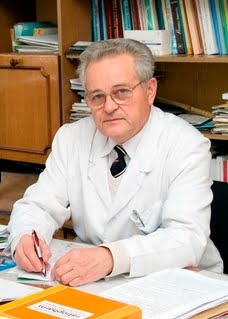 The name of Professor Voloshin O. I. belongs to the luminaries of Bucovinian State Medical University, who made valuable contribution to medical science both by his practical work as a hospital therapeutist, lecturer, teacher and doctor of medical sciences, well-known in Ukraine and abroad.
Olexander Ivanovich was born on the 2nd of January, 1943 in the village of Kadubivtsi of Zastavnyanski District in Chernivetski Region in the family of peasants. His father was mobilized during the Great Patriotic war and was killed on its Victory Day on the 9th of May, 1945. Hardships and starvation were well-known to Olexander in his childhood and youth, who was brought up together with his elder brother by their widowed mother. It was thanks to his mother, who was fond of nature and keen on herbs , picked them up and cured diseases, that Olexander Ivanovich acquired a passion for nature and interest in its medicinal treasures. In 1959 Voloshin finished a secondary school and entered Medical Institute in Chernivtsy. Experienced and competent teachers, lecturers and scientists helped the gifted and obsessed with medicine student reveal and develop his talents and skills to the full. Professors Lapshin F. V., Turkevich M. G., Kirshenblat J. D., Pisko G. T., Schupak H. B., other and especially doctor of medical sciences, Honorary Scientist of Ukraine Olena Ilarionivna Samson contributed greatly to the formation of Voloshin as a scientist. In 1965 he graduated from the Institute with distinction. From 1965 to 1966 Voloshin joined the Soviet Army where he worked as a senior military doctor. From 1966 to 1968 he was a therapeutist in the district hospital of Kiseliv, from 1968 to 1969 he worked in the hospital and lectured a course of physiotherapy in the medical college of Vashkivtsi.
From 1969 to 1971 Olexander Ivanovich did a post-graduate course at the Hospital Therapy Department of Chernivtsy Medical Institute,where he worked as an assistant from 1971 to 1987 and in 1973 defended his candidate theses with success . In 1988 in Kyiv he defended his doctorate dissertation “Clinical and Pathogenetic Foundation of the Rehabilitation Stage of Chronic Primary Gastroduodenitis Therapy”, working as an assistant professor from 1987 to 1989 and professor from 1987 to 1989 at the Department. In 1990 Prof. Voloshin headed the Propedeutics Department of Internal Medicine and launched a new scientific trend – usage of apiculture, medicinal herbs and other sanitary resources of the region with the aim to improve the technology of their usage and therapeutic efficacy. Professor Voloshin O. I. reared a scientific school of his followers with such famous scientists as Chernyavska N. B., Pishak O. V., Senyuk B. P., Kalenyuk V. I., Voloshina L. O., Malkovich N. M., Lukashevich I. V., Zakharchuk T. V. and many others among them. His scientific heritage numbers about 400 studies, textbooks, manuals, reference books and monographs. He is the co-author of 48 rationalization proposals and 18 patents for inventions.
O. I. Voloshin has always been active in social life, being the head of the Young Scientists Council (1973-1976), a member of the Inventors’ Council (1976-1986), a science secretary of the Scientific Council of Chernivtsy Medical Institute (1986-1993), a member of the Therapeutists’ Presidium of Ukraine (1992-1998), a deputy of the Regional City Council (1992-1996), and worked in the board of such medical journals as “Bucovinian Medical Herald”, “Clinical Pharmacology, Physiology, Biochemistry”, “Clinical and Experimental Medicine”, “The Archive of Clinical Medicine”.
Prof. Voloshin’s dedicated and selfless work was marked with the state awards and badges of distinction, among them “Excellent Health Worker” (1990), “Honorary Doctor of Ukraine” (1995), Yuriy Fedkovich prize-winner (1998), “Excellent Worker of Education” (1999), Honorary Diploma for achievements in science and education (2002).
Nowadays Professor Voloshin O. I. is at the prime of his scientific and therapeutic talent, deeply respected and sincerely loved by his students, colleagues and grateful patients, full of endeavour, zeal and enthusiasm.